The 10 best things to do in Quito – Welcome to the capital of Ecuador and the country’s second-largest city. At an elevation of 2,850 meters (9,350 feet, or nearly 2 miles high), Quito is also the highest constitutional capital city in the entire world, nestled high up in the heart of the Andes. Quito is unique; it is the South American Capital with an untouched Colonial Centre, lying undisturbed by the new Modern City. Quito to become the first city in the world to be declared a UNESCO World Heritage Site in 1978. This city in the sky is surrounded by an immense natural beauty, history, architecture, and traditions great and diverse.

To organize your visit, we give you our list of “The 10 best things to do in Quito”: 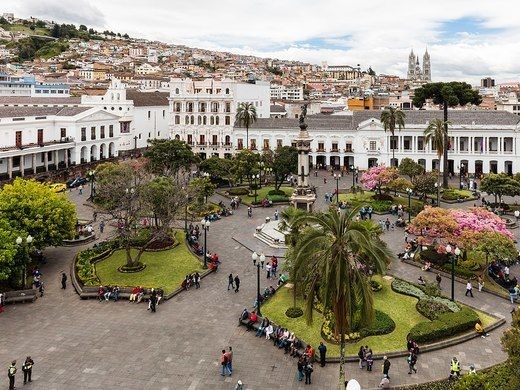 Plaza Grande, is Quito’s main central square of the old town and is a great place to start. Is the heart of Quiteño Heritage, is walled by the four pillars of society, The Cathedral, the Archbishop´s Palace, Carondelet Palace, and Municipal Palace.  This plaza is a constant hub of activity, often serving as a site for political activism or public opinion. In the center stands a large monument installed in the late 19th century in commemoration of Ecuador’s. This fascinating plaza guards the secrets and legends of the city.

Presidential Palace, also known as Carondelet Palace, this is where Ecuador’s president lives and works. The white stucco perfectly symmetrical palace, fronted by a long row of columns supporting an upper balcony. A Presidential Palace”, inaugurated at the start of the 19th century, overlooks the plaza and around the exterior are a variety of restaurants and shops.

Is another exceptional Quito landmark. La Compañía de Jesús, is Quito’s most ornate church and a standout among the baroque splendors of the Old Town a few blocks away from Plaza Grande. An Energetically charged sanctuary, known for its gold-covered interior. And its extraordinary Baroque facade is a hearts and cherubs carved in volcanic rock. Is the most salient religious colonial building left by the Spanish. Constructed by the Jesuits in 1605, this church took 163 years to build. 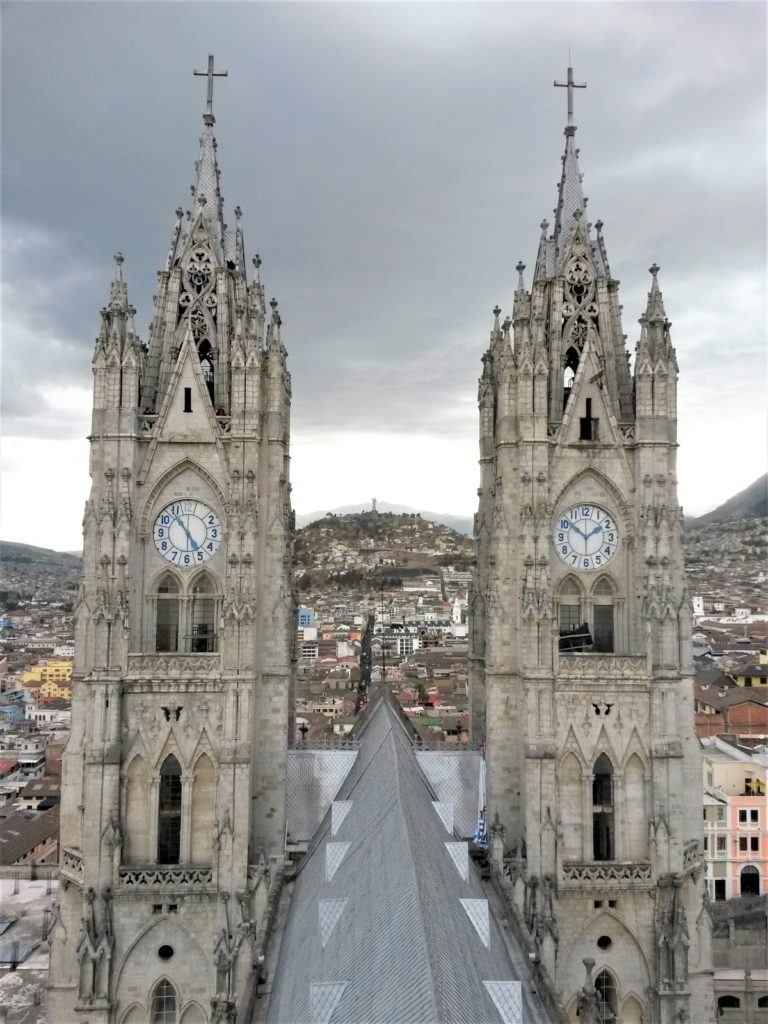 Also found in Old Town, the Basilica of the National Vow is actually the largest neo-Gothic church in all of the Americas. Visitors can climb its two large towers up to the clock faces, climb higher, and finally reach the top to enjoy incredible views of Quito and explore the architectural beauty. The gargoyles often define gothic churches. Yet here in Quito, native animals have been put up in their place, replicas of animals found in the Galapagos Islands, Ecuadorian iguanas, armadillos, and Andean condors serve as gargoyles. And their colorful stained glass is not to be missed. Definitely make sure that climbing their towers is on your list of the best things to do in Quito!

You can visit this and other interesting places in our city tour! Click 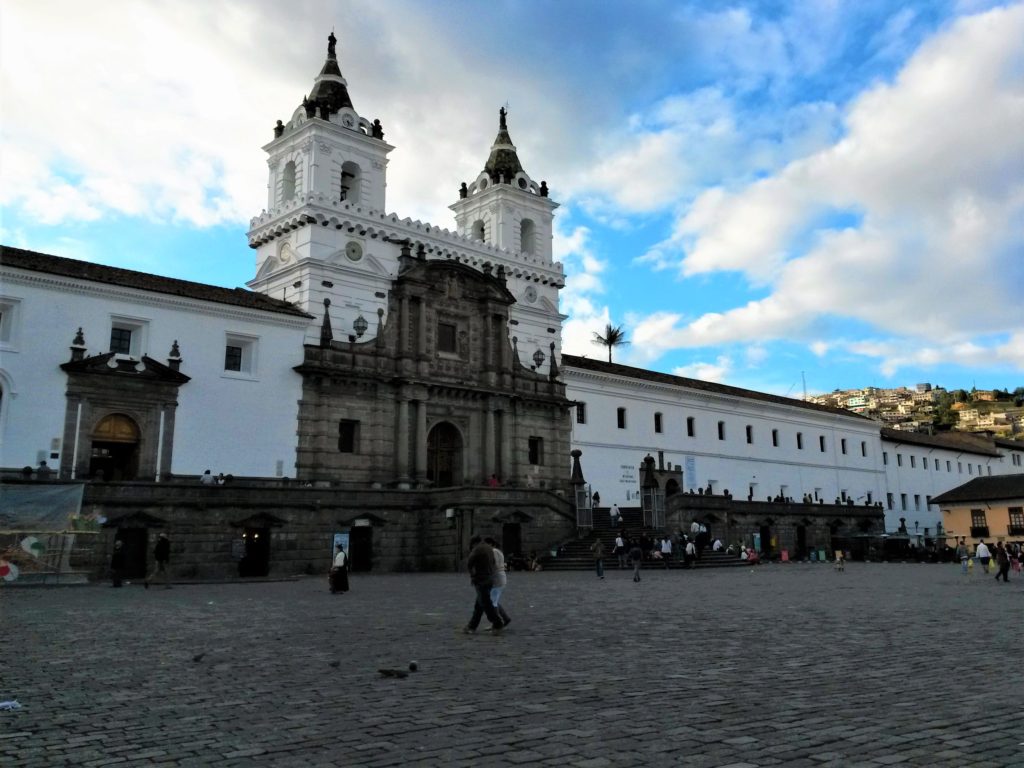 Plaza San Francisco, Is the monumental outline of Quito´s oldest church and monastery.  The plaza contains a chapel, a museum with religious art, cafes and street vendors. But it’s the Andes views here that provide a beautiful natural backdrop during the day. The San Francisco Church is a truly impressive church, with their white walls dominated by the twin bell tower and beautiful stone-carved portal. San Francisco Museum, situated in one of the seven colonial patios inside the immense religious complex, house of the most important collection of colonial/religious art from the great artists of the Escuela Quiteña. 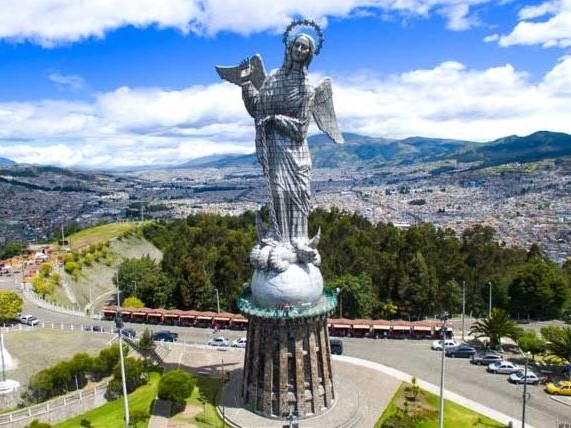 Guarding the historic streets of Quito’s Old Town, There is the “Virgin of El Panecillo” sitting serenely on the summit of Panecillo hill, and is one of Quito’s most recognizable landmarks. The awesome holy figure of the Virgin is a modern representation in aluminum of Bernado de Legarda, winged, dancing Virgin Mary, the masterpiece of the main altar of the church of San Francisco. Visitors can ascend The Virgin statue for an even better view of the city below. 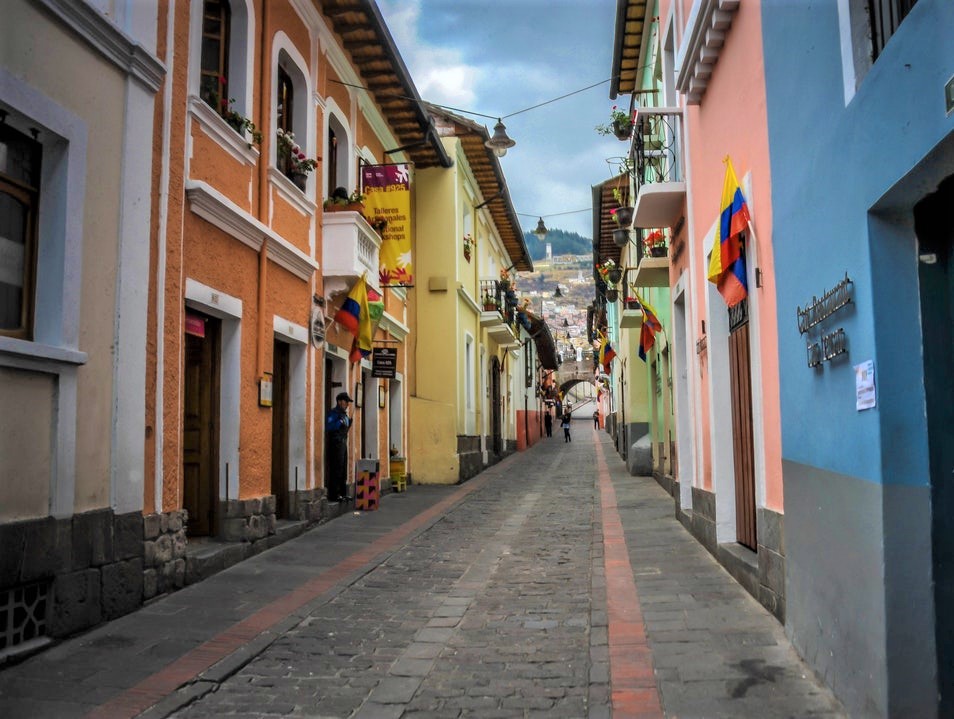 This quaint pedestrian walkway slices right through Quito Old Town, was built in 1600. This picturesque alley is lined with thick-walled, whitewashed houses with tiny quadrangular windows and colorfully painted balconies. Step back in time and walk through the open doorways to find small courtyards often with a few shops and many “cafés”, where you can order the specialty here: a “Canelazo”, is a warm alcoholic drink. This Ecuadorian beverage is made from hot cinnamon-sugar water that is usually flavored with local fruit, most commonly naranjilla. Add aguardiente (sugarcane alcohol) to give canelazo its kick. We can’t think of a more perfect setting to sip canelazo than perched on a balcony in La Ronda with Empanadas de viento or “wind empanadas” so-called because of the airy interior that’s created when it’s fried, has melted cheese inside the dough and a bit of sugar is sprinkled on top. 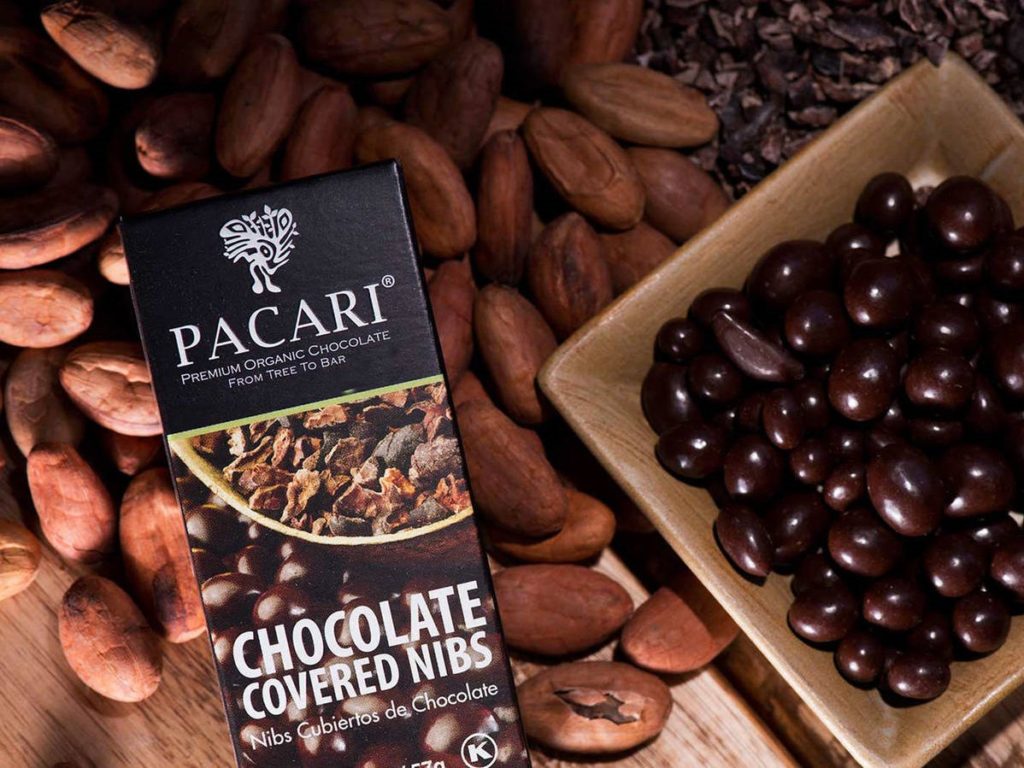 This is a delicious experience that you cannot miss. Pacari is a family chocolate company founded in 2002. They are precursors of a movement that led “Arriba Ecuatoriano” cacao to become a synonym for quality. Each of their chocolate bars is created based on sustainable processes, fair-trade, organic, and has a biodynamic certification.  Pacari Chocolate products are available in most health food and luxury chocolate outlets, and exporting to more than 42 countries worldwide.

In Pacari the tasting consists of savoring pure chocolate bars and others that contain flavors from Ecuador. Experience with each flavor the virtues of fine aroma chocolate, enjoying every bite, while we go through the history of cacao in Ecuador to rescue and share endogenous flavors, with international quality and made with the best cacao in the world, the consequence is more than 200 international awards. In 2019 Pacari opened its flagship retail store La Floresta. They offer products samples and a cafe that serves ice cream, hot chocolate, and other dishes. 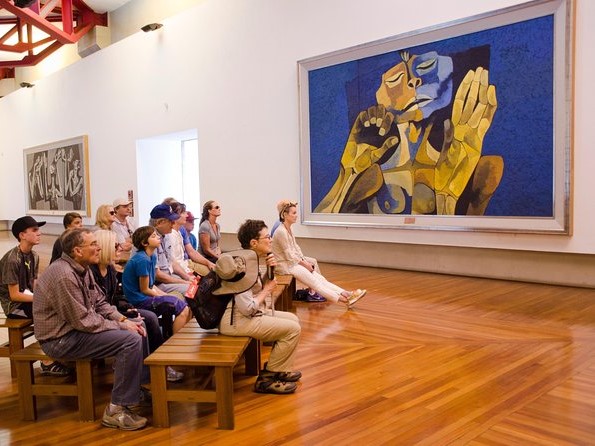 Oswaldo Guayasamín (1919–1999) is arguably Ecuador’s most famous painter and one of the most important works of art in South America, Oswaldo Guayasamín used his outstanding, excellent talent to capture and portray the pain and misery suffered by humanity. His works have been exhibited in all the American capitals and many European countries.

The Museum of Guayasamin, offers a peek into Guayasamín’s lifestyle. This wonderful home/museum shows the most complete collection of the artist’s work. It also shows off the artist’s prized collections (pre-Columbian ceramic, bone, and metal pieces), his bedroom, his working art studio.

Capilla del Hombre (Chapel of Man), is his masterpiece building. Guayasamín personally designed it before his death (1999) to showcase his masterworks, this giant monument-cum-museum is a tribute to humankind, to the suffering of Latin America’s indigenous poor and to the undying hope for something better. Here is the unconcluded mural of the artist illustrating the history of the American man. 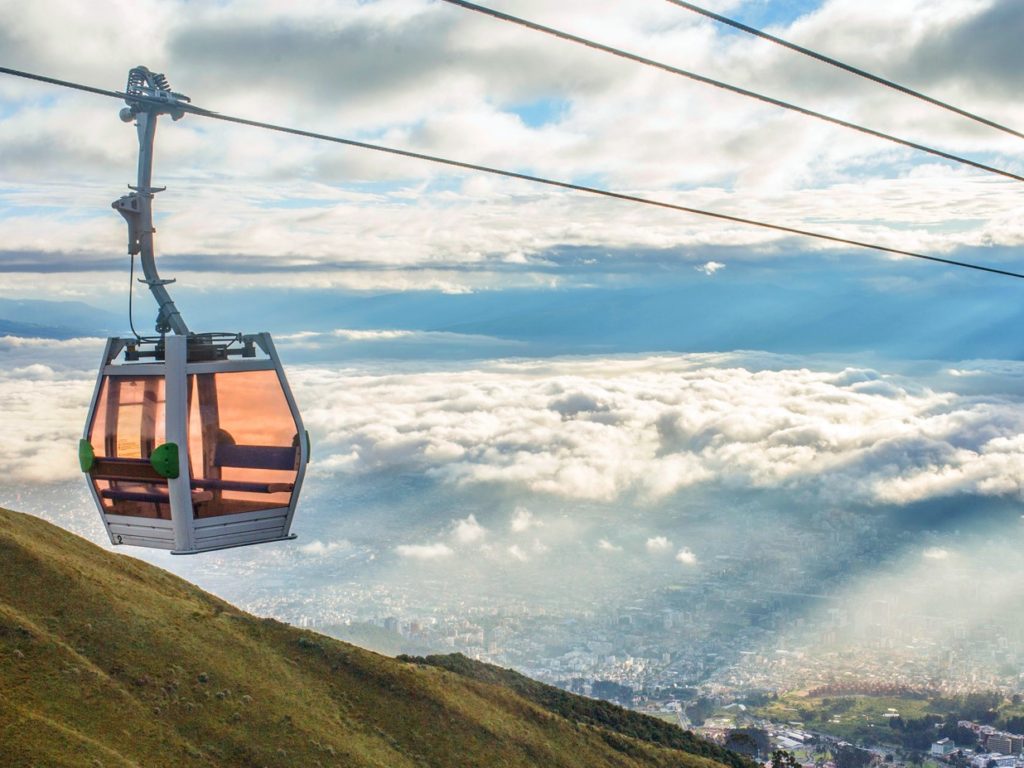 Far above the city looms the Volcano Pichincha. The view from the top on a clear day is perhaps the top sight to see in Quito, and the TeleferiQo is the best way to get there. You can hike to the summit of Rucu Pichincha (4675m), a 4km (five-hour) round-trip hike up this active volcano. There is also a rock scramble towards the Rucu Pichincha summit. So, this should only be pursued by experienced hikers. Contact us for more information.

Quito’s TeleferiQo is one of the highest cable car lifts in the world. It’s pretty incredible to be able to go from the middle of this bustling capital city to be transported to the peaceful mountaintops, to an altitude of about 4,100 meters (about 2.5 miles high). The 2.5-kilometer ride (10 minutes) on the aerial gondola up the flanks of Volcano Pichincha to the top of Cruz Loma. Is a lot of fun!

Ask about the safety situation before attempting the climb and bring warm clothes. 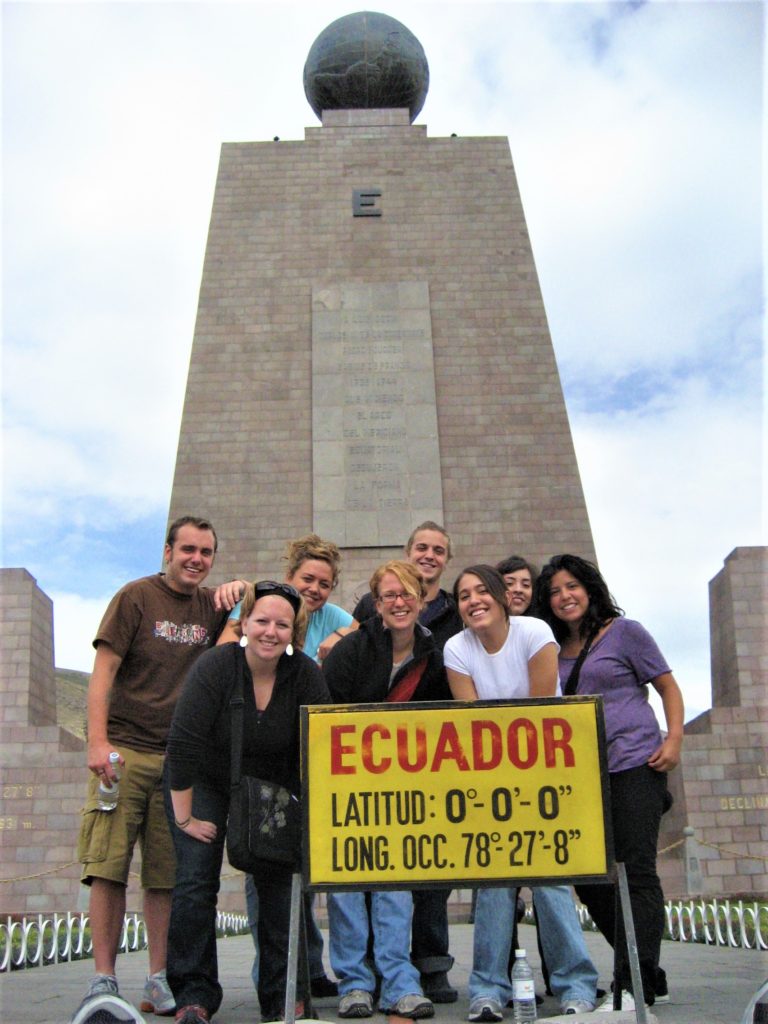 This place is one big tourist attraction near Quito, just a short drive north of Quito, This is where the Equator line passes, for which Ecuador receives its name.

Mitad del Mundo (Middle of the World)  provides a great opportunity to be in two places at once, hemisphere north and south. The monument here is the main attraction. However, is surrounded by an area known as the “Ciudad Mitad del Mundo” (Middle of the World City), Here, visitors will find a veritable microcosm of Ecuadorian culture comprised of tourist shops, restaurants, and even small museums and planetarium. Offering artisan goods such as alpaca blankets, exotic Ecuadorian food including guinea pig. You really do feel at the center of everything. We have the perfect tour for you! Click here

If you want to have a unique experience in Quito, CONTACT US to personalize your tour!